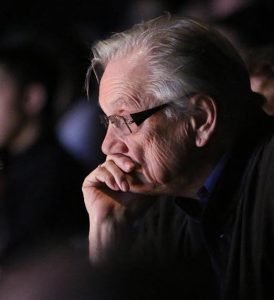 I could not begin to tell you why, but I have always liked reading interviews, especially interviews with writers. Just this morning I was browsing a thick hardback of Allen Ginsberg interviews. I have read here and there that the interview is just floss, or gloss, or dross. But I like the sometimes telling spontaneity of a live interview or the careful touches in a written one. I liked the one conducted by Judith Fitzgerald so much that I included it in my book of poems Teeth. By the way, you could not pay me well enough to read an interview with Eminem. ––GB

“It seems that reckless creativity is essential to his literary instincts. He is fascinated by the creative forces infusing even the most mundane circumstances, and he writes in order to share their turbulent energy, not to control it, but to ride with it and see where it will take him…[he regards the writer] as witness to the vitality of creation—a thrilling, terrifying, liberating vitality felt especially in the babble of words energized by rhythmic voice and metaphoric urgency.”—Bill New, Encyclopedia of Literature in Canada

I have done a lot of stuff on radio and TV and the intersomething, but I just let that stuff come as it may. “Lost in the Library” began as an assignment when I was Parliamentary Poet Laureate; I first presented it from a wheelchair onstage at the National Library auditorium. “Standing on Richards” is Elvis Prusic’s compression of two of my short stories; I have long been a fan of Colin Mochrie and love his work here. I would like to hail the spirit of the women who worked with Pamela Bentley to make “A Little Black Strap.” ––GB

Lost in the Library