I have always liked collaborating with dead poets, and have got some of my best poems that way. And I have always collaborated with musicians. I wrote those youthful songs with my pal Will. I later wrote words for songs played by Gary Kramer and his rock group “The Works.” It was neat going to a dance and dancing to one’s own stuff. I have co-written orchestral and choral music with professional composers a lot younger than I, and even performed in a concert hall with Mario Bernardi. Recently I made a video with a jazz trio in Toronto. All kinds of music.

…But you know, I have often said that all serious literature is part of a huge collaborative act. That is one of the reasons for my contention that there is no difference between reading and writing. 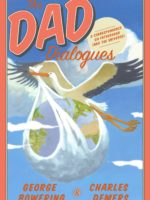 Charles Demers is a thirtysomething comedian and the author of three books; George Bowering is eighty, Canada’s first poet laureate, and the author of more than eighty books. Charlie and George are also the best of friends. And the fathers of daughters.

In this unique book of correspondence, these two men from different generations write to each other about the burdens, anxieties, and singular joys of parenthood. The letters begin as Charlie and his wife discover they will become parents; he expresses his hopes and fears of impending fatherhood, compounded by his OCD and his own father’s illness, while George recalls his experiences raising a daughter in the 1970s and his anxieties about bringing a child into a troubled world.

Together, their thoughtful, funny, candid missives reveal what fathers know (or don’t know) about raising daughters, as well as themselves and each other. Their combined observations make for a passionate, funny, and moving portrait of fatherhood in all its imperfect, beautiful glory.

“The Dad Dialogues affords an intimate look at the diapers, despair and overwhelming joy of fatherhood. Not war stories from the trenches; instead a rare advertisement for male nurturing.” —BC Bookworld
“There is lots of funny stuff, and lots of tender expressions of fatherly love, which manage to skirt the flanking dangers of Hallmark card/Father Knows Best sentiment on the one hand and ostentatious tough guy posturing on the other. In the middle of this difficult balancing act, they provide the reader with a lot of serious material to think about, ranging from the ethical complexity of bringing a child into a daunting world, the ways that the rigours of child rearing can change and deepen a relationship, or scuttle it, and the always contentious question of whether men can describe themselves as feminists.” —Tom Sandborn, Vancouver Sun
Billed as “A correspondence on fatherhood (and the universe)” this book is an intimate exchange between two fathers at different stages of parenthood and adulthood. Funny, heart-breaking, and revelatory this book made me laugh and cry, often at the same time (which is familiar territory for a parent). Yes, I do want to pre-order Cara’s side of the story now! —Wendy on GoodReads

“The book is a verbal jousting match, a late-night game of chicken, and you keep waiting to see who will swerve first. Knighton’s pretty confident, but Bowering’s got nerves of steel honed over carhaps and mishaps all over the world. And amid the drama, you’re laughing. Out loud.”—Jacqueline Turner, Georgia Straight

It happened in Vancouver. Just before “the 60’s” started. A whole new generation of poets, writers and artists shook off the repression of 1950’s Vancouver. Piccolo Mondo blurs the lines between the fiction and fact of those days, challenging both the boundaries of narrative and the rules of biography. This hilarious collaborative novel chronicles the coming of age of a generation, a city and a literary culture.

“This isn’t a book requiring shelf-space for cherished re-readings, but the first time round it’s fun.”—Globe & Mail