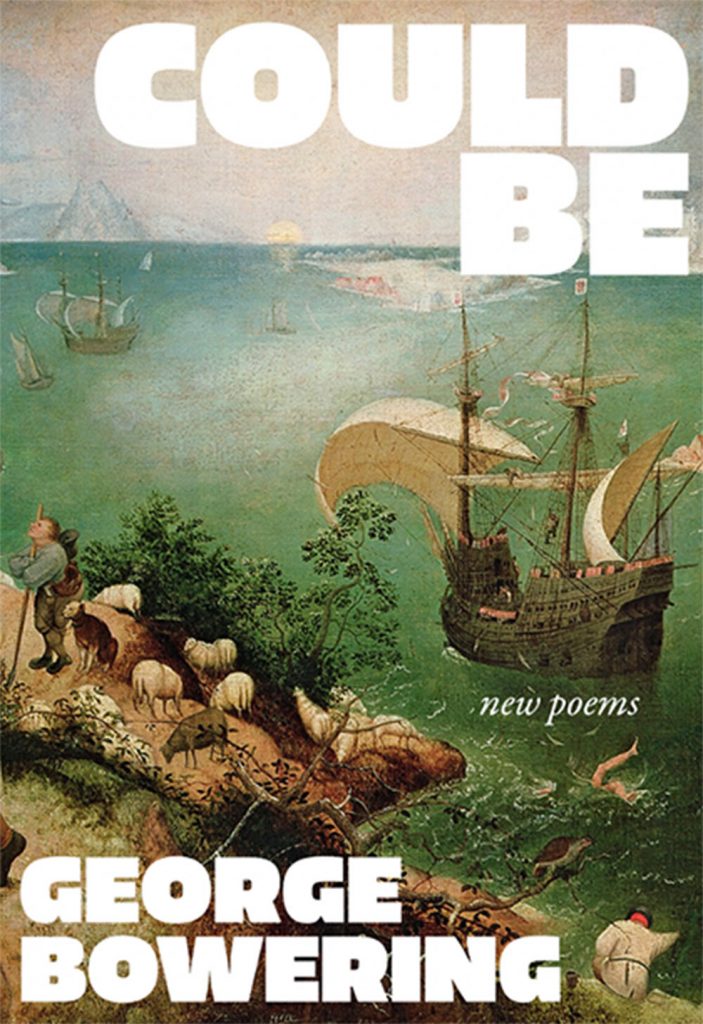 “Still producing at the height of his powers” is a cliche that rarely applies as well as it does to George Bowering's recent output. In Could Be: New Poems, gathering work since his close call five years ago, Bowering shows off a wiser, though not necessarily mellower, aspect alongside the wit and unerring ear readers have come to expect from one of our greats.

Glad to be alive, these are poems that look out into the world with fresh eyes, curious as any young poet's. Only now the shadow of mortality finally takes its proper place alongside life's many other sources of magic and wonder. Sunlight and warmth suffuse these poems, formally spanning short lyric verse, “found” stuff, and a long poem (“Sitting in Jalisco”). Rewarding attention as always, with Could Be George Bowering adds to a substantial body of work.

It is as though as Bowering continues to produce work, some six decades after the appearance of his first collection, the ways in which he assembles poetry collections, although no less complex, have become far more nuanced. The poems connect through quieter means. Just listen to the soft ease of the opening two sentences of the poem “Basura”: “I’m so happy just to be with her’s / a phrase been going around in my head / where the mortality has set up shop, / probably, I don’t know, a normal eventuality, / but when she’s far away from me, I’m awfully / blue. The way blue used to mean, awfully / blue, like a roadside someone threw / basura into, a ditch used up stuff ends down in, / used up being the way old writers / are made to feel.” There is an awful lot going on in those two sentences, stretching out across the first third of this single-stanza poem, but in a way that unfolds smoothly and slowly, his sudden turns appearing as naturally as water or breath....
These are poems of attention, looking simultaneously, it would seem, in every direction; lyric meditations with the usual Bowering attention to cadence, allowing the rhythms to flow across and down the page. His poems over the past few collections have grown quieter; no less sharp, but attentive to the progress of age and attention.  --rob mclennan

There is a temptation to read Could Be as poems of an octogenarian’s nostalgia for the expectation of beauty’s return, but George Bowering cautions us in ‘Gilbert Sorrentino,’ his homage to the great lyric poet Lorine Niedecker who wrote all her poems out in longhand: “People sometimes say, oh, I / love your book, and when I have the nerve, I’ll say / that’s not what it was written for.”

We become our own fathers in the dead heat of overtime, like Daedalus, cautioning our children against our own designs. What a gorgeous inning, George!—Karl Siegler, The Ormsby Review 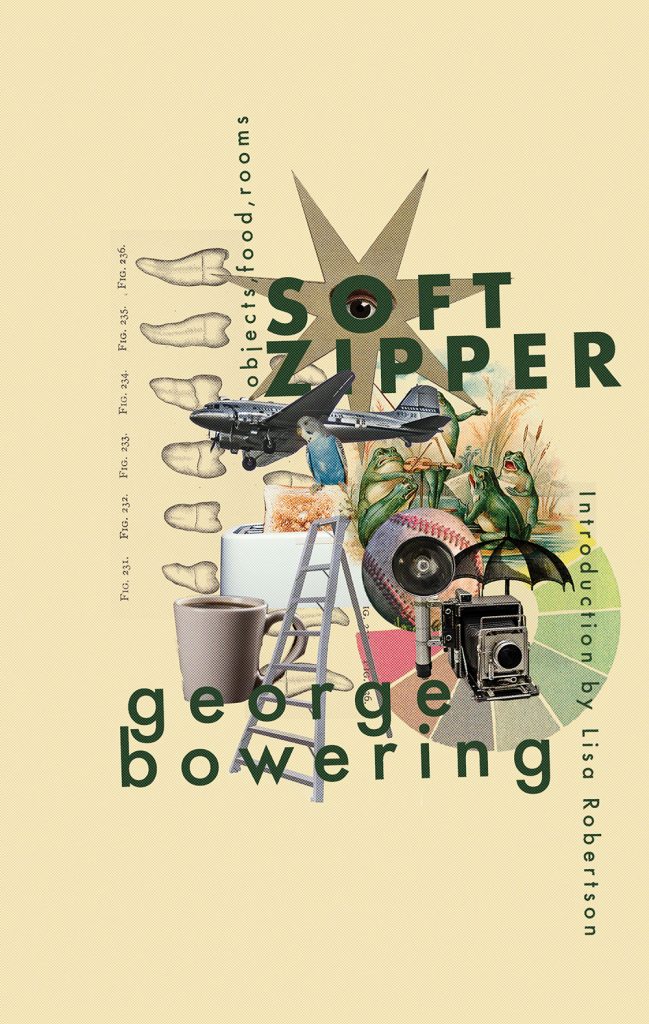 This engaging memoir relates stories about George Bowering's small-town BC upbringing and his parents — his father long dead and his mother more recently passed on at the age of 100 — while at the same time honouring the author's other “parents”: Gertrude Stein, Charles Olson, and Roland Barthes.

Borrowing a structure and some precepts about writing from Stein, Bowering remains true to his inimitable self, relating his recollections and observations, his ever-curious mind travelling across the decades as he recounts some of the objects, food, rooms, and people that have shaped his engagement with the world. Charles Olson's ideas about proprioception shape Bowering's approach to himself as “an object among objects” (and, with increasing age and frailty, even one containing numerous objects), while Roland Barthes's writing strategies also make themselves felt throughout.

But these stories wear their learning lightly — it's ridiculously easy to enjoy these wise and gentle reminiscences of an older writer who spent his childhood in sunny South Okanagan, without even noticing the carefully wrought structure.

Lisa Robertson (The Baudelaire Fractal, The Weather, Cinema of the Present, 3 Summers, &c.), herself a student of George Bowering, provides an introduction to this deceptively simple and richly rewarding work by an old master:

Soft Zipper, a fragmented anti-memoir which organizes a lifetime of vignettes and recollections around a resolutely objective, rather than subjective point of view, borrows a structure, and subtitles—Objects, Food, Rooms—from American modernist Gertrude Stein’s 1914 volume Tender Buttons. What Stein discovered in writing her prose poems (also while on holiday, but in Spain), was that space is a synthetic perception. We compose it retrospectively with glimpses, borrowings, visual and musical rhymes and puns, and the staccato movement of our attention. In Tender Buttons the domestic detritus assembled by early Cubists in their still life collages finds its way across into her prose poems, and becomes there a plastic field of syntactic experiment, “the rhythm of the visible world” as she later explained. Where Stein’s ear is playfully abstract, or at least abstracting, George’s sound sense is vernacular, keyed to the plain pleasures of familiar speech. William Carlos Williams, rather than Eric Satie, would be a sonic predecessor. Prose is a domestic production her. His spaces too are often fabricated and flesh out in accordance with the homely pleasure of touch. (Lisa Robertson, “Introduction: Button Kosmos”)

Soft Zipper works through, as Lisa Robertson explains in her introduction, a structural echo from Gertrude Stein, but one that could also be an echo of, say, the late London, Ontario artist Greg Curnoe’s own 1961 artwork, “Drawer full of stuff.” Bowering writes underneath individual subject-titles in three sections, from “TWO BOWLS” and “THE BONE” to “PICKY EATERS” and “WAITING ROOM.” There are elements, also, of his Autobiology composing similar memoir recollections through short blocks of prose, although without the structure of objects, food or rooms. It reminds, also, of Kingston writer Diane Schoemperlen, who composed her debut novel, In the Language of Love (1994), in one hundred chapters, each of which was titled and prompted by one of the one hundred words in the Standard Word Association Test. bpNichol began his novella, Still, which won the 3-day novel writing competition for 1983, by describing the objects in the room around him. For Nichol and Schoemperlen, these processes were used as jumping-off points for fiction. For Bowering, it is a curious way to produce a memoir, and an intriguing way to prompt memory, allowing that narrative leap from a word or a phrase to spark where that section might go. And, given the fifty years between compositions, it does exist as an interesting counterpoint to the pieces in Autobiology: how he writes his recollections of growing up in the Okanagan. Bowering is, of course, famous for having employed numerous writing strategies, or “baffles,” throughout the length and breadth of his work; structures determined before the first word is written, as a way of allowing the work to be a collaboration of sorts, between where his attention strays and the direction the writing itself suggests. As he writes to open the piece “OBJECTS,” one of the first in the collection: ‘Charles Olson announced that it might be a good plan to regard oneself as an object among objects, and in that way have a chance to share the secrets that objects know. To me that suggests not holding oneself as subject with the material about one and in one’s poetry as objects, subject to one’s gaze. Not to see something, compare it with something, and describe the independence out of it. Make the external internal and the internal external? Why? Why not let things do their own doings, not yours?’ —rob mclennan

These essays aren’t obscure at all. They are playful, wistful, nostalgic, and profound. —Sheldo Goldfarb, The Ormsby Review

George Bowering is looking everywhere, at the world and his pieces of it, with his head slanted and the corners of his mouth raised. Bowering is the grinning boy who turns life over and takes it apart to see if the centre is cork, like a baseball. He's the guy who treasures the earth — the largest object he’s ever touched — with all the cities and coasts and the room in Rome where Keats died. He’s the man who places memories of his beloved ballpark on a shelf alongside the complete poems of Samuel Beckett. And the one whose “crooked fingers” stroke his father’s dusty felt skullcap. He’s the poet who breaks down in tears at the haunting beauty of Donatello’s Penitent Magdalene (and doesn’t dare try to describe it). He’s the husband whose wife, Jean, makes sure he doesn’t exist on a diet of meat loaf alone, and the father who draws faces on bananas. He’s the writer — past, present, and ceaselessly forward — who for eighty-five years has relished the startling and wonderful jumble we call existence. George Bowering picks up the objects of his life and releases them in a shower of shapes and colours, just like the buttons his grandmother kept in a big glass bowl...

Soft Zipper offers a slice of a mind. And like the best, Bowering does not fall under the spell of his own mythology. He is an object among many, each one doing “their own doings,” as Olson would have wanted. Sly and playful, forever on the lookout for the beauty of a line, the groaning delight of a pun, or the wisdom of sentences that remain as fresh today as they were sixty, a hundred, or hundreds of years ago, Bowering is present and writing. Lives are made up of words, and these are very good ones. --Literary Review of Canada